Do you use Photoshop?

So many a talented photographer is asked this, do you use Photoshop? First up if you can’t compose, expose and focus (capture) the image correctly then no amount of PS (Photoshop) is going to help. Secondly camera’s cannot capture the same dynamic range as we can see with our eye (that’s generally why in point and shoots the sky is over exposed). The camera struggles to keep detail in the shadows and highlight so often exposes correctly for either one or somewhere in between leaving the extremes with no detail and over/under exposed. Those in the know use a variety of techniques to overcome this limitation. Photographers either use filters to balance the exposure during capture, take multiple exposure and blend them in PS, or pull as much detail out of a single exposure (double processing the RAW file for shadows and highlights).

Is it still a photo or an illustration? As soon as we pick up a camera we alter perception due to the effects of focal length, focus, aperture so what’s the difference when we post process the photos…none!Â  We still alter perception, most of the time trying to represent the scene in a ‘true to life’ manor working around the limitations of current camera technology. These techniques have been around for a long time, and are not attributed to theÂ Photoshop era. They are mostly from the darkroom days where photographers would dodge and burn selectively exposing areas of the image. Here is an interesting photo of the late, great, world famous Ansel Adams. 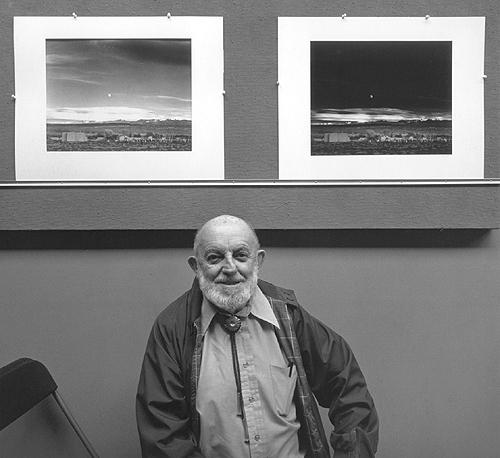 The version to the left of Ansel is straight out of the camera, the one on the right the final processed image. Note the sky is considerably darker and most of the clouds have been removed. This was intentionally done in the darkroom, not in PS but the thought process is the same. In fact in this case he has altered reality. The photo was taken in 1941, and I would have to say a great photo. I agree in a lot of cases post processing of images can cross the line and become garish especially with the increasing use of HDR software. Processing should be done sparingly, keeping things natural otherwise a photo becomes an illustration.

I use Photoshop, there I said it.