First up I would say use a tripod whenever possible. I hardly take a photo without one. If you want to enlarge those prized images they need to be sharp. Handheld just isn’t good enough when you pixel peep and get into 100% magnification. If using a tripod isn’t possible grab the camera firmly with both hands one underneath, one to the side and brace the camera with one arm tight against your side. Breathe slowly and when steady take the shot. Alternatively use a rock or wall and hold your camera firmly against it. Of course this isn’t advised if you are precious of your gear.

If you are going to use a tripod then I would suggest getting a remote release. They are relatively inexpensive for the basic model and allow you to remove any camera shake introduced by pressing the shutter release. Alternatively using the timer function on your camera allows you to press the release and let the camera/tripod steady itself before the shot is made.

If it’s windy try and shelter the camera as much as you can. I’ve had a few shots at 200mm ruined by the wind.

Remember to keep those tripods as low as possible, the higher they are the less stable. I use an L-Bracket on my camera. It allows me to take portrait shots whilst keeping the centre of gravity over the middle of the tripod. 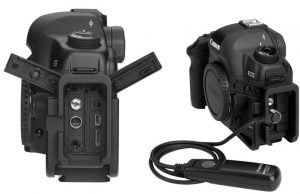 To further maximise sharpness use the mirror lockup function of the camera if available. This will lock the mirror up before the shutter is released minimising shake from the shutter/mirror action, bit overkill but I guess it all counts.

If we are talking landscape photography and you want those images sharp front to back then I recommend appetures of around F16 for full framed sensors and F11 for cropped. Anything higher you will run into diffraction issues (I’ll leave it to the tech heads to explain this).