Well what to say about the amazing Claustral Canyon…first up a word of warning. For anyone that might be inspired to venture to Claustral Canyon please note doing so is extremely dangerous and has resulted in death for a number of people. It should only be undertaken by those who are fit and experienced in abseiling and rock climbing. So onto my experience…

An intrepid group of four, including Tim Wrate (photographer), Lewis Fogerty (photographer/fearless canyoneer), Craig Margieson (fearless canyoneer), and myself ventured into the depths of Blue Mountain’s canyons. The long and hard day started at 5.15am with a quick sunrise shoot at the popular Three Sisters, the most photographed rock formation in the area. I’ve never been happy with my photos from this location and this morning was no exception. 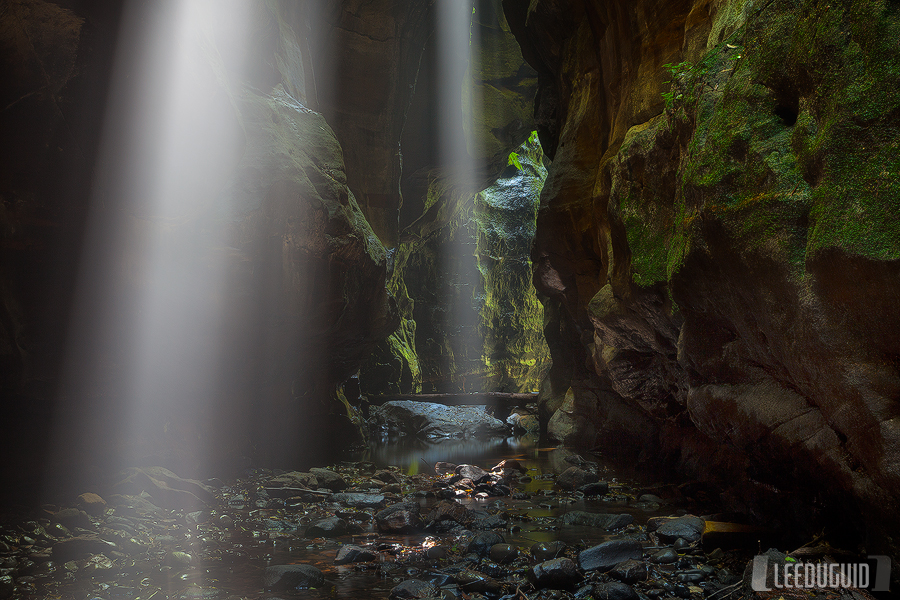 Claustral Canyon floor – shafts of light pierce through to the other wise dark environment.

Anyway back to our lovely motel to ‘gear up’ before driving North to the start of the track. This involved packing a 50L dry bag with a minimal camera setup (Canon 5D MkII, Canon 17-40mm F4 lens, remote release, circular polarising filter, spare memory card, GoPro) housed in a medium Internal Camera Unit (F-Stop camera bag terminology) along with an emergency blanked, a warm wind proof top, a small towel, and a compass. The dry bag slid perfectly into my F-Stop Tilopa Country backpack along with 2.5L of water and food for the day. The whole thing weighed about 12kg with my tripod strapped to the side, this was the minimum I could take. At the start of the trail (side of the road, point marked on map) on went my thermals, a full length wet suit, harness, board shorts (to protect harness and wet suit), canyoning shoes, and helmet. We set off at 7am, little did we know we wouldn’t return for another 17 hours. 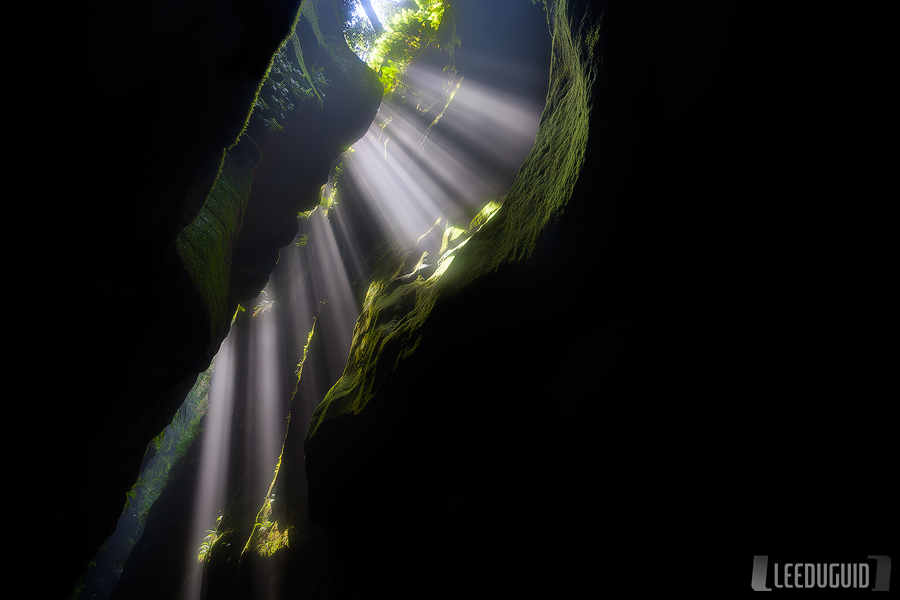 Rays of light broken up by rocks and vegetation, open space can just be seen high above

After a bush bash following no obvious track we came to a 15 meter drop, this was the first chance to get my abseiling technique down pat. I was happy to practice self belaying having only done indoor rock climbing prior. We lost an hour with this detour but now started to follow streams and progress further into what seemed like small canyons, we were back on track. The excitement grew and we had landed right at the start of Claustral Canyon. 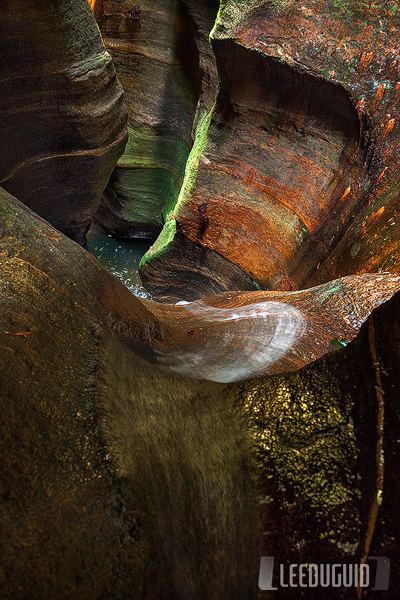 Black Hole of Calcutta and its amazing carved walls 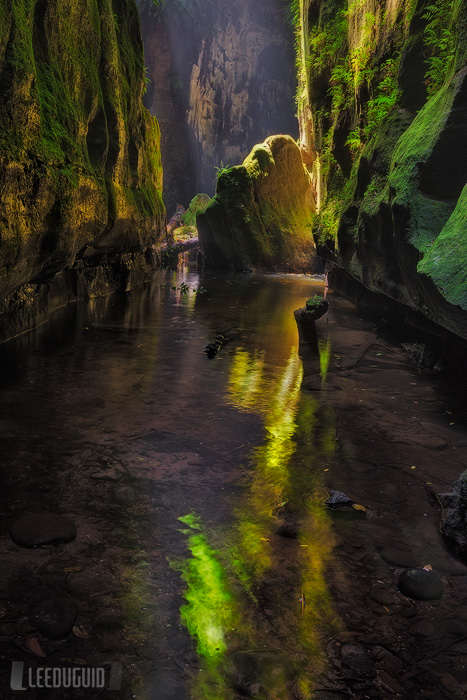 Light reflects off the canyon floor

The next stretch consisted of a series of abseils through amazing carved narrow passage ways. From water level to what seemed to be the top, or at least where we could see light had to be 30 meters of smooth, wavy, mossy walls. I had a feeling of vulnerability when we waited to abseil the Black Hole of Calcutta a stunning cylindrical tunnel dropping 15 meters. I thought if the water was to rise here we would die for sure, I have since learnt this has been the case in one instance. The ‘lucky’ survivors were pushed by the increasing water levels through the small exit hole falling the 15 meters into the water below. The remaining member of the party was not so lucky. 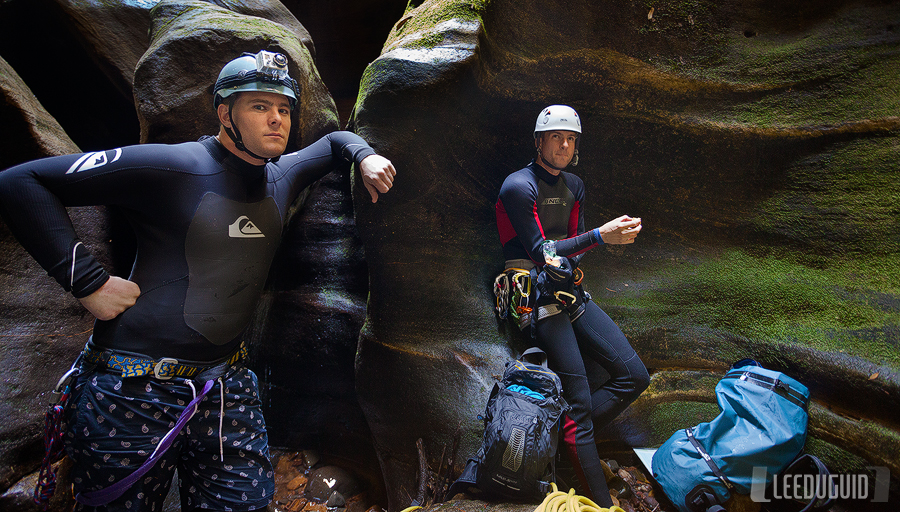 Tim and Craig wait for the next abseil (down the Black Hole of Calcutta), is that fear or determination on Tims face? 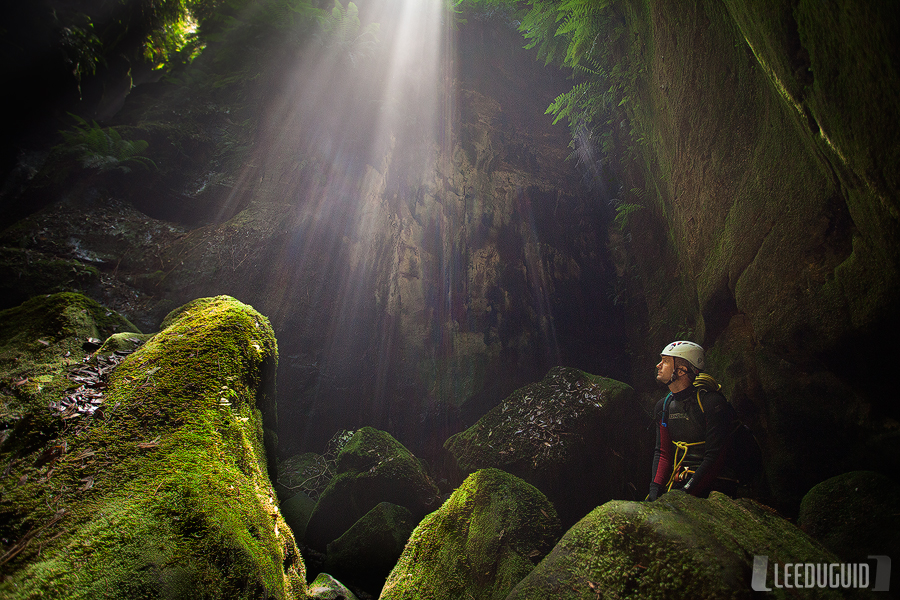 Craig looks on after abseiling the Black Hole of Calcutta 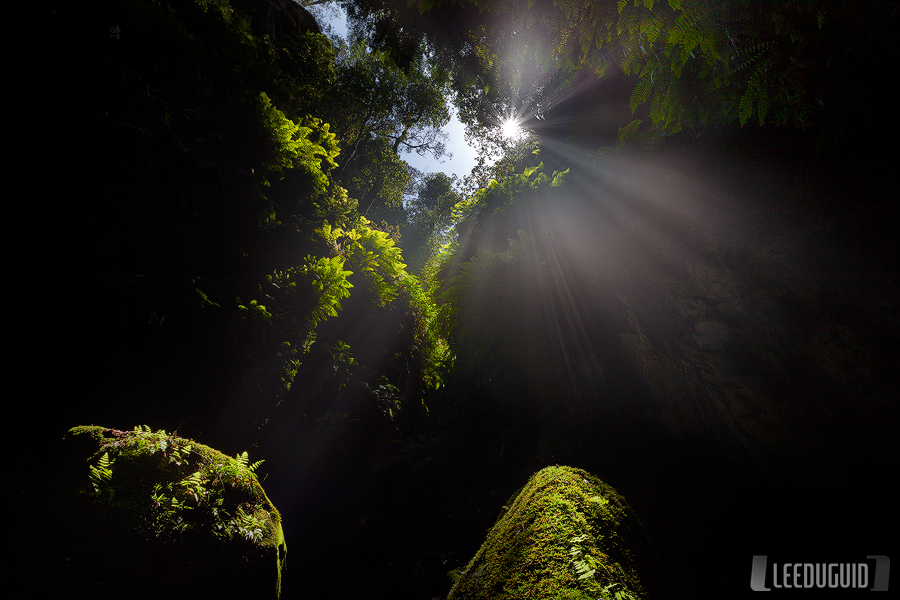 A short distance after the Black Hole of Calcutta, what a beautiful start to the magnificent canyon floor and fern forrest

After the abseils and a 50 meter swim we were now at the canyon floor, this was our chance to photograph. Unpacking and setting up my gear took some time. Even after taking every precaution to keep our gear dry the canyon floor is a very wet and humid environment. I soon gave up on my polarising filter which I planned to reduce indirect light with. Rattling off a few shots before packing everything up to swim a short distance before unpacking it again slowed things down. What felt like 10 minutes was probably more like 40, it was time to leave.

We then proceeded to scramble down lots of rocks using hand lines on the harder bits working our way towards the exit. This took the best part of two hours, the time approached 5pm. This gave us 2 hours for the exit before it got dark. The instructions for the exit were “Scramble up the exit gully for about 20m and then traverse left under the cliff to Rainbow Ravine”. We choose to ignore the second part for some reason and headed straight up the gully for about 100m. This was tough climbing for the inexperienced me, I was dry retching with fear, oh joy! We finally made it out after a hard slog only to realise that we had messed up and had to abseil back into Rainbow Ravine which was 50 meters below us. Having 60 meter ropes doubled up meant it would have to be done in two stages. The first a 25 meter abseil then a difficult traverse to a small ledge where all four of us clung onto for our dear lives. It was Tim’s turn to freak out with lots of gasps for air and shakes of the head. This was not good and we only had a few more minutes of day light left. Not the best time to be going back into a canyon. 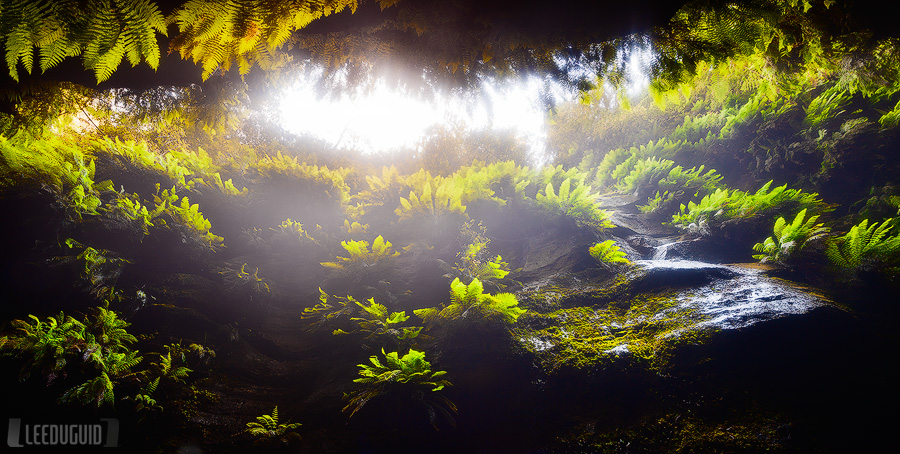 Looking up the fern lined walls

We had all reached the canyon floor again, this time it was dark. The first technical climb I remember thinking this is stupid, this is how people get hurt. In reality it was a pretty easy, however it was made all the more difficult as we were now navigating using head torches and there was a 5 meter drop. The glow worms were out and I had to remind Craig on the gravity of our predicament, he was all too relaxed for my liking. Following the track notes and with a bit of guess work we made it high enough to get some phone reception, we could now message loved ones that we were safe…I failed to mention I was still stuck in the middle of nowhere, oops. It was 9pm, we had all run out of water and still had another 4 hours of walking (thankfully we didn’t realise that).

Following very old, under used and over grown tracks it took us a great amount of time and luck with lots of back tracking to finally get out to the road then our car. We had climbed 600m in elevation over the space of 5km, now that’s hard work. Back to civilisation, and Pizza, the only food available at such a late time. I had decided that I had enough of canyoning at 4pm whilst in Claustral, needless to say the next 9 hours hadn’t changed my mind. Sunday involved sleeping until checkout, a cooked breakfast in Katoomba, lots of coffee and a hasty retreat back to Sydney. All in the name of photography! 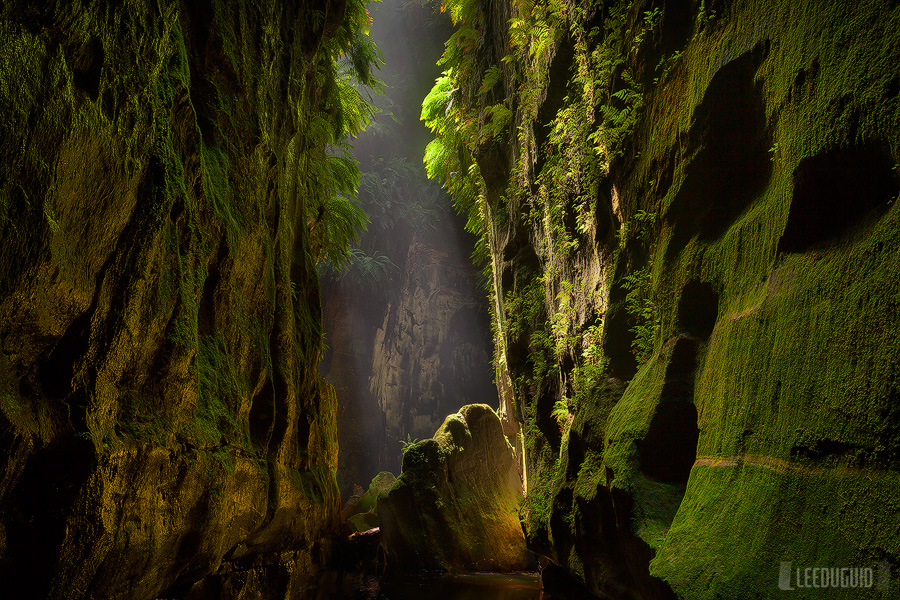 The deadly yet beautiful Claustral Canyon at its best