A weekend photographing the snow, I was excited to say the least. The only problem was it was May, spring had sprung, and with the warm temperatures we had been experience in Nice there was a chance I may not see any snow at all. Passing through Saint-Martin-Vésubie I drove down one of the two nearby roads that lead to the mountains. The first of which I went up last Autumn when I photographed Cougourde. It’s a glorious part of the world with some great hikes, lakes, rivers, wildlife and landscape photographs to be had.

Climbing the steep road it soon became apparent this place had a ton of snow during the winter and maybe even an avalanche? Exploded trees lining the road on both sides, very strange. Anyway there were also the odd piles of snow dotted around. As I climbed they got more frequent towering above my car until wow, a complete white out. It was snowing, yay!

After a restless night at La Madone de Fenestre a refuge for cross country skiers and the like I got up to shoot the sunrise. I was one of the last up, don’t you just love people in the mountains (or mountain people)? Off to bed early, up and out the door before dawn! Clouds covered the mountains so sunrise didn’t go off like you might hope however I explored the nearby rivers and waterfalls with great pleasure. I had promised my wife I would stay safe but taking this photo I found myself in a predicament. I wanted better seperation between the tree and the mountain at the top of the shot which required me to take a couple steps to the right. The only option to do so with out levitation was below me down a snow covered slope with a large drop into the river. Being that I don’t seem to learn my lesson I went for it however I decided to make a hasty retreat when the first rock I put my foot on gave way crashing into the river below. This is the composition I settled on.

The mountain in the background is Grand Cayre de la Madone, looks like a great spot for camping next winter… 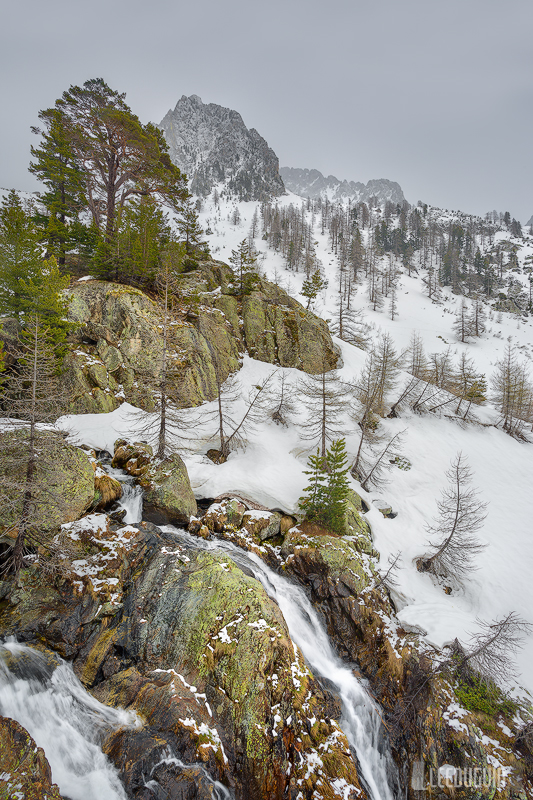