I’ve been busy planning a two week trip to Iceland starting in a matter of days. It’s a bit daunting when planning such trips. You know nothing about the place, what to expect, where to go, how best to spend your time, what everything will cost, and how to fit it all in. After much research, for me everything is pretty much in place. I thought I might share my experience in planning such a trip, it may be helpful for planning your own trip (to Iceland or elsewhere).

So my main concerns for this trip were:

Flights
So first up flights. Living in France at least I was on the right side of the world for visiting Iceland. A look on SkyScanner and there were a number of options, varying in price. Nice isn’t a huge transport hub so I couldn’t fly direct. In fact I will be flying with two different airlines via two different countries for each leg. In addition to Skyscanner I also checked some of the budget carriers. For some reason Skyscanner doesn’t necessarily show you all the possibilities. From my own research I found that Easyjet do crazy cheap flights to Keflavik from London. However the times were pretty bad, so back to Skyscanner. As much as I hate doing it, I booked through a travel agent website and not direct with the airline. It was cheaper to do it this way, so fingers crossed there are no problems.

Transport
With all the reading I had done and all the advise I had gained it was apparent that I would need to hire a 4WD vehicle. It seems the access roads off the main ring road that circumnavigates the island are not sealed and are better driven in a 4WD (although they can be done in a sedan, just slowly). There are also a number of locations I would be shooting, accessible only by non-sealed roads and that require a number of river crossings (gulp).

So with that I priced up several providers in my trusty travel spreadsheet. I’m an avid fan of a spreadsheet, and do most of my planning with them. Specifically I use Google Docs, hosted on the cloud, I can access them from anywhere with internet or download them to my phone. So with my spreadsheet I could easily weigh up the hire cost, and make a judgement on potential cost of petrol vs fuel economy of each choice. The winner for me was a Dacia Duster, from Blue Car rentals. It reportedly provides good fuel economy, and was a bit larger than the standard 4WD. If need be I can sleep in the back with the seats folded down. I’ve been assured that the back seats go all the way down so it is entirely flat however I’ll believe it when I see it! By the time I added in insurance, which comes optional with other car hire companies, the prices were practically the same. Blue Car rentals also comes recommended by a number of friends and fellow photographers, so let’s see how they go.

Accommodation
I’m not shy of a bad nights sleep, and often subject myself the torturous activity they call camping. It seems this is the way to go in Iceland. It afforded me flexibility and a huge cost saving. As to date I have no idea where I will be spending my evenings, how good is that! In Iceland, as long as you are respectful you can camp anywhere. I’ve done a fair bit of winter camping so I’m confident my gear will hold up to most of Iceland’s weather, apart from maybe its wind. This is where the 4WD will come in. For the times I need to shower I’ll rock up to one of the numerous campsites to use their facilities. I’m going in the low season so I’m guessing no booking is required. 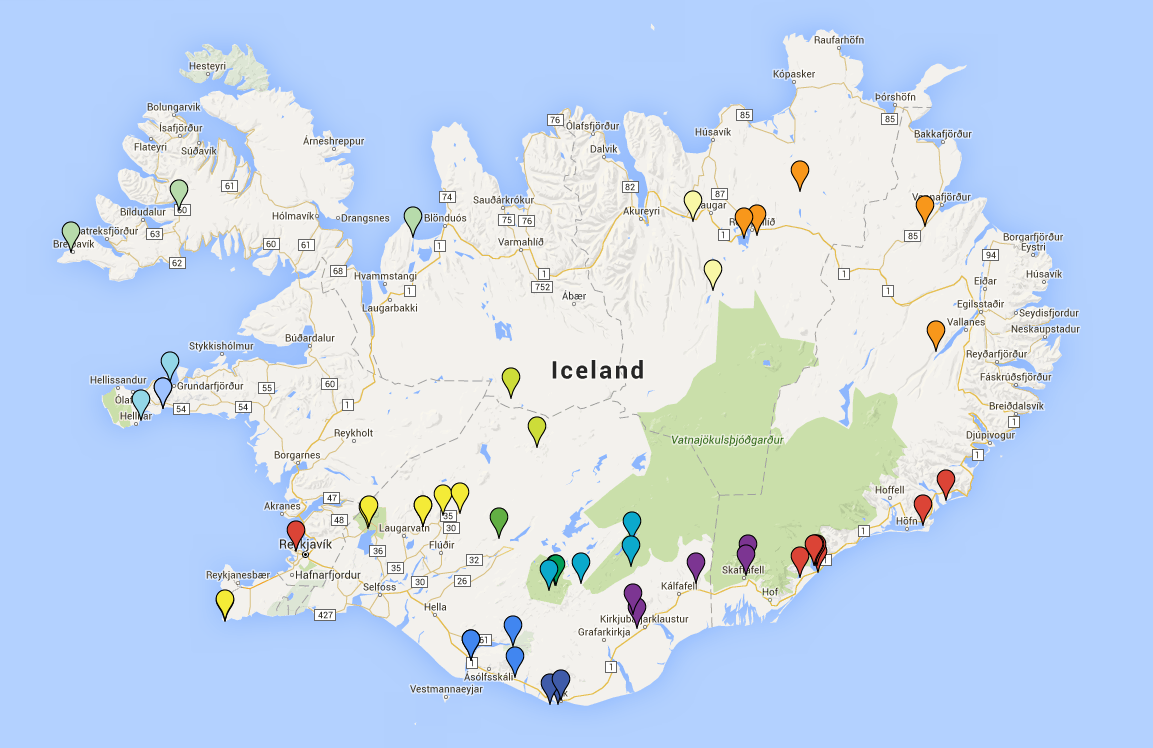 Itinerary
My itinerary would of course be based around what I wanted to shoot, arranged into some form of logical order, and prioritised. Compiling my itinerary required lots of research, pulling inspiration from 500px, blogs, travel websites and other photographers I know that have already shot in Iceland. If I ever found something of interest, I would Google images looking at what compositions there were to be had and ‘pinning’ my favourites to my Pinterest board.

With the internet thoroughly searched I moved to Google maps where I placed the locations on a map (who would have thought!). During my research I also found other peoples maps, some people had gone to great lengths to document anything of slight interest in Iceland. So I imported one map I found and began to filter through the information I may want to keep. A number of campsites were already marked which will be useful to get access to amenities.

So with my map I coloured coded the pinned locations I want to visit with different colours, representing the different days I would visit them on. This gave me an indication of how long it would take to get around the island and where I could afford to stay some more time. From the looks of it I have an extra day up my sleeve if I want to stick around or the weather isn’t playing nice.

Once I had somewhat finalised my map Jarrod Castaing, an awesome photographer I know from Sydney kindly reviewed it. He noted that some of my pins were placed incorrectly, and some great spots for photography I had missed out. Jarrod has visited Iceland a number of times and was happy to help (thanks Jarrod).

Insurance
Now this one for me is still on going. It seems France or Global insurance doesn’t provide coverage for high end photography gear with a limit of about 500 Euro on any single item. I can’t get Australian insurance as my journey begins in France. So anyway I’ll offer some advise. Make sure your gear is covered. Crime in Iceland is pretty low but it seems, based on the experience of other photographers, a good place to lose, drown or break your gear. Check the overall total you can claim for personal belongings, and also and single item limits. Itemise and photograph all the gear you will be taking. Take your camera gear on the plane with you including a tripod. I personally will be wearing all my hiking gear and taking my cameras on board so I’ll be ready to rock regardless of what happens to my check in bag.

Gear
It seems I’m taking more gear than clothing. I’ll probably live in my hiking gear for two weeks, and maybe take some jeans for my last night. I have a dinner date with Jarrod and his wife, so I had better look presentable. Here’s a list of some of the gear I’ll be taking:

Anyway food for thought, maybe this will give you some ideas about how to approach your own trip. Please leave any comments or questions you might have. Bon voyage!